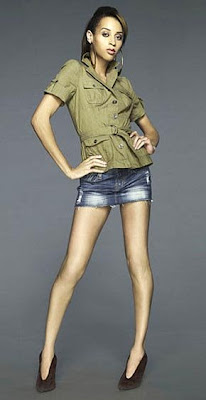 Oh Tyra you’ve done it again! The 11th season of America’s Next Top Model, which starts up on Sept 3rd, will be featuring a model who was born a man, but is now a woman. My dictionary says that’s called “transgender.” Now, kids at home, what that means is that the model (named Isis) was born with Mr Winky Claus, but it may have been chopped off and a rack was, well, installed. If I had access to a chalkboard I’d draw it out for you because that’s how IBBB’s father taught him about the birds and the bees. That’s not a joke. Hi dad!
Anynuts, I’m sure Ms J and Mr Jay are going to be so jealous they’ll be begging Tyra to cut of their dilly-dilly-ding-dong with hair cut scissors during the makeover episode. Personally, I don’t discriminate. No really, I don’t. I think it’s great that Isis is is comfortable with herself to let people know that she used to pee standing up. I’m not sure how resident ANTM episode recapper, Jenny, will handle this week after week, but I’m sure that hijinks will ensue!
GLAAD is totally psyched about Isis being on ANTM 11 and has said, “We applaud Tyra Banks and The CW for making this historic visibility of transgender people possible.”
Ugh. You know Tyra did this just to get the applause. I wonder if Tyra will teach Isis how to smile with the space between her legs instead of her eyes? Is that still technically called the taint? I can’t keep up.